A chemical plant manufacturing pesticides has been operating since the 1950’s in the Sacco River Valley (Central Italy). In 2005, high beta-hexachlorocyclohexane (Beta-HCH) concentrations were found in milk of cows raised and fed near the river. We report the results of a biomonitoring study conducted in this region to evaluate the body burden of Beta-HCH and to identify the determinants of the human contamination.

We defined four residential areas by their distance from the chemical plant and the river, and selected a stratified random sample of 626 people aged 25–64 years. We evaluated the association, in terms of the geometric mean ratio (GMR), between several potential determinants and Beta-HCH serum concentrations using multivariate linear regression analysis.

The results suggest that people living close to the river may have been contaminated by Beta-HCH, most likely through water from private wells and privately grown food. A programme of epidemiological and clinical surveillance is on-going on this population.

The complete version of this article can be found at: http://www.ehjournal.net/content/12/1/57 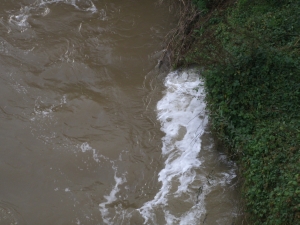