The Ministry of Cultural Heritage and Activities and Tourism (MiBACT) after the public notice expiring on 16/01/2017, has decided to assign the management (see also La Repubblica) of the Certosa di Trisulti to the Dignitatis Humanae Istitute. The Certosa di Trisulti is an important ancient monastery that was consecrated in 1211 and becoming a national monument in 1873. The Dignitatis Humanae Istitute is a think-tank founded in 2008 by Benjamin Harnwell and linked to christian conservative circles. Other exponents of this association are also some italian politician like Luca Volontè and Rocco Buttiglione, and honorary presidents Cardinal Burke [1] [2] [3] and Cardinal Martino [1] [2]. Another known link of the founder is also that with Steve Bannon the controversial alt-right exponent and chief strategist of US President Donald Trump, who attended a conference [1] [2] at the Vatican curated by the Dignitatis Humanae Istitute (also New York Times talked about this). This is the presentation that the Institute has proposed to Pope Francis to illustrate his project about la Certosa di Trisulti. From all these documents available on the web it is possible to identify the peculiarities of this organization:

“The Dignitatis Humanae Institute (Institute for Human Dignity) is a think-tank founded in 2008 whose goal is to protect and promote human dignity based on the anthropological truth that man is born in the image and likeness of God. Our primary aim is to promote this vision of authentic human dignity mainly by supporting Christians in public life, assisting them in presenting effective and coherent responses to increasing efforts to silence the Christian voice in the public square. We do this by coordinating affiliated parliamentary working groups on human dignity throughout the world.”

“The Institute is a think tank that conducts research, issues articles and press releases, organizes press conferences and coordinates affiliated parliamentary working groups in the UK, Romania and Lithuania. It aims at “promoting dignity based on the recognition that Man is made in the image and likeness of God”

It can be noted that they mainly deal with religion and its relations with politics and parliamentary work. Traces of “activities of protection, promotion, enhancement or knowledge of cultural heritage” as required in point 4 of the Mibact notice? Apparently none, or almost none. In fact, a page of the website talks about the management of the “Little Monastic Museum of Civita” always in the little town of Collepardo (the same of la Certosa), “of recent opening, this museum has been entrusted by the Abbot of Casamari to the Istituto Dignitatis Humanae in autumn 2015″ as reported by the well-known local turistic website CiociariaTurismo. The same Mibact public notice always in point 4 requires an experience of at least 5 years: b) documented at least five years experience in the field of protection and enhancement of cultural heritage; c) documented experience in the management, in the last five years prior to the publication of this Notice, of at least one cultural, public or private property. There are therefore many doubts that this organization has the requisites for the management of a monument of such importance. 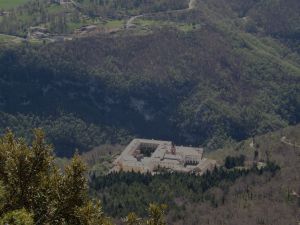