This article is an automatic translation into English from the original: L’Urna di Anagni

The complete history and some bibliographical data on the beautiful urn found in the territory of Anagni (central Italy) in 1899, then disappeared for years and reappeared in the collection of the Metropolitan Museum in New York:

O Roman Urn, Thing of Beauty. Almost every museum with holdings of classical art has cinerary urns, but most are in the shape of architectural models with columns, pediments or lidded vessels. Few are exceptional works of art. So when Carlos Picon, the curator in charge of Greek and Roman art at the Metropolitan Museum, spotted an elaborately decorated Roman imperial urn at Sotheby’s sale of antiquities and Islamic art in New York this month, he knew the museum had to have it. ”We only have four or five urns, and most of them are fairly standard,” Mr. Picon said. ”This is the most unusual one to come on the market in over a generation.” Dating from the early first century A.D., the marble urn is festooned with intricately carved spoils of war: helmets, spears, horns, swords, even a roughly hewn tree trunk draped in a tunic and surmounted by a wreath of flowers. ”It’s a wallpaper of trophies in the most exquisite detail and of the highest quality workmanship,” Mr. Picon said. The urn was excavated in 1899 from a tomb near Anagni, 33 miles southeast of Rome. In early Roman imperial art, trophies and weapon friezes are more commonly found as decorations on monumental triumphal arches. ”We assume it was commissioned for someone high up in the military,” Mr. Picon said. Scholars believe that the designs could have been copied from a triumphal arch, now lost, and that the urn is an important historical document showing the types of arms used in battle by the armies Rome defeated. There is only one other known example of anything like this urn; it was recorded in 18th-century drawings but subsequently lost.

The object is lucky: published at least nine times in as many texts. But it always shows a large part of one of the two missing major panels: in the upper right hand corner. A photo of 1928, is certainly different from the one that made it known: presumably, the urn is still in Anagni. Matilde Mazzolani was the first to declare her “dispersed” in 1969. And since the 60s, the object is found in London: first of the collector K. J. Hewett, who died in 1994 at 80, then, of Howard Ricketts. But in 1976, crossing the Ocean. He is in Chicago: he changes three times, until he goes to auction at Sotheby’s, in New York.

Meanwhile, in London, at another Sotheby’s auction in 1988, the missing fragment appears. Wrongly declared “copy from the ancient”. However, at the time of the excavation, the Countess Lovatelli had certified that nothing more had been found: the tomb robbers did their utmost again in the field of discovery? However, the lacerto is bought by Ariel Herrmann, who, shortly after the purchase of the urn by the Met, gives it to the museum. It fits perfectly, and completes the mutilated face. Largely recomposed (except for a smaller side with a false door), the urn is displayed in the new Metropolitan gallery, restored thanks to the $ 20 million gift from the Shelby White and Leon Levy foundation: famous couple of collectors, who has already returned to Italy objects excavated by fraud, in fact, did not disdain to buy masterpieces of the ancient illegally extracted from our underground, and smuggled out of the country.

Ariel Herrmann was born Kozloff, curator at the Cleveland museum and her husband John, at the Boston museum. Both are often cited in the trial against Gianfranco Becchina: one of the two great Italian “traffickers” who, in Switzerland, have been confiscated thousands of pieces and photos. John is called a mediator for the Levy-White couple. The wife, by admission of the memorial of Robert Hecht, who ceded to the Met the Euphronium Crater with the “Death of Sarpedon” now returned to Villa Giulia, has increased the collection with objects from our country, and, from 1980 to 1994, she has been in contact with Becchina, negotiating purchases. But he also developed the documentation of the finds later merged into the Fleischman collection, sold to the Getty but considered an instrument to recycle the finds from the then Pm Paolo Giorgio Ferri. Strangely enough, the new fragment of Anagni’s urn reaches her. Therefore an urn of a thousand mysteries. Except one: from Italy, smuggled out. Sandra Gatti, who has long been head of the Rome Export Office, has found no traces of any authorization, mandatory from 1909 onwards.

The publication of Ersilia Caetani Lovatelli on the Bulletin of the Municipal Archaeological Commission of Rome (1900) concerning the urn: 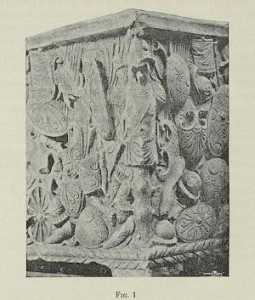 point 74 indicated by Mazzolani within the territory of the municipality of Anagni, near the provincial border

Concervino (UT_171) (Mazzolani 1969, No. 72) Near the Fosso del Formale, on a slope of about 200 m. s.l.m., there are the remains of the west and south sides and the southeast corner of a large terracing in a polygonal structure. On the so-defined pit there are two sets of rooms, pertinent to a rustic villa. The western core has foundations with large squared blocks of sandstone and structures in cement works with travertine blocks; the eastern one, about 40 m. from the previous one, it preserves walls of 50-60 cm, covered in opus quasi reticulatum executed with limestone blocks. The foundations, which have a projection about 40 m, are made of blocks of local stone, irregularly arranged and bound with abundant mortar. On the site there are also quarter-circle bricks and further downstream other ceramic and brick fragments. Nearby is a necropolis with chamber tombs, from which according to the testimony of Ersilia Caetani Lovatelli there is a urn in Lunense marble with a frieze of arms, compared by Sandra Gatti to the base of the Trajan column; the object and a fragment pertinent to it were acquired by the Metropolitan Museum of New York in the 80s, after having been illegally exported outside Italy. The distance of the villa from Anagni is 6.5 km.

positioning of point ut_171 on the attached map, in the Colle Concervino area of Anagni

Footage about the Urn filmede inside the Metropolitam Museum of Art (source youtube):