The Valle del Sacco is a vast territory between the provinces of Rome and Frosinone in the central-southern Italy. The intensive exploitation that for decades affected of this valley due to no-scruple companies and crooked public administration offices, produced an unprecedented environmental and social disaster. 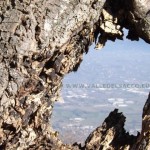 The story started in 1912 with the BPD, a defense industry designed by Leopoldo Parodi-Delfino, who made up out of thin air a city around that industrial agglomerate, just over the Sacco river.
In the beginning, BPD produced mostly industrial and military explosives. Between 50′s and 60′s BPD developed a wide range of rocket fuel. In 1968, BPD has been acquired by SNIA and in 1994 by Fiat Avio. Since September 1955, during a point of order at the Italian Parliament, a statement has been submitted claiming that BPD was spilling into the Sacco river acids and other harmful products that were “not only almost destroying the huge ichthyic patrimony in the river starting from Colleferro (Rome) on , but also they were representing and enormous damage to the animal patrimony, especially in Sgurgola, Ferentino, Supino, Patrica, Ceccano, Castro, Pofi municipalities, that during summer need the Sacco river water.”

Those warnings were unheard. During the years, a grievous twisting of business and politics, together with influence peddling aiming at distributing jobs, allowed the institutional representative in charge for protection of the Valle del Sacco territory, omitted the controls on the local polluting factories and helped the penetration into the territory of mafia-like organization devoted to crimes against the environment (called “ecomafie”).

In the 90′s, tons of toxic barrels have been discovered buried in Colleferro, in the industrial zone. Hence a trial was organized, and in 1993 a Velletri Court verdict stated SNIA guilty for illegal disposal of dangerous waste and it was forced to recovery the terrains in the area through the intervention of various regional competent offices.

From the buried barrels, there were leaks of a dangerous substance called beta-hexachlorocyclohexane (B-HCH), coming from the lindane, a pesticide produced many years before by the chemical industry SNIA-BPD, that reached the river.

That was the first documented act showing the activity of toxic waste burial in the Colleferro industrial area.
Nevertheless, the recovery process started in 2005 while thousands heads of cattle were suppressed along the valley that were found to be contaminated by beta-hexachlorocyclohexane.

In 2009, the recovery of the areas were still not finished. During the 2009, further environmental damages were discovered, and therefore severe consequences on public health due to wast incineration plant, strongly supported by the politicians since 1999 in spite of adverse local public health officers viewpoints, were reported.

That was claimed to be a “model” incineration plant, managed by a public society made of many municipalities of the valley and forced to “swallow” and burn pretty everything.
On March 2009, a Carabinieri squad, a specialized environmental unit police corp, from Rome executed 13 orders of arrest and 25 notices of investigation, signed by a judge of Velletri Court, for people living in the provinces of Rome, Latina, Frosinone,Naples, Avellino, Bari, Foggia, Grosseto, Livorno.
The crimes the prosecutor addressed to them were criminal-association-like : illegal traffic of wastes, forgery, fraud against the State, abetment, violation on air emissions and abusive access to computer systems.

The plants in Colleferro should have been treating only authorized wastes but they were practically burning also toxic wastes coming from Campania region. 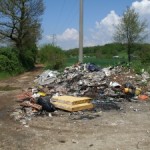 The prosecutor also reported that Carabinieri found in various trucks small radiators, copper tubes, metallic wires, batteries and even ceramic materials. Even tyres, mattresses and asbestos-based cements were found. All the story started from a denounce coming from a former worker that triggered the investigation. If anyone in the plants would have opposed to those practices, the company provided punishment and disciplinary measures to discourage them to collaborate with the police authorities.
The prosecutor from the Velletri Court, also ordered the requisition of the incineration plants in Colleferro even if they were still authorized to continue the regular activities under the control of the Carabinieri ecological-unit from Rome.

The exploitation of the Sacco valley has been also confirmed by data (source : local sanitary officers, ASL Rome E) published in September 2008, coming from an epidemiological survey done on a sample of local inhabitants : B-HCH, polychlorinated biphenyl (PCBs), dioxine, heavy metals such as cadmium, mercury and lead have been found in the blood of the people living and working in that area.
Almost 53% of the people in Sacco river surroundings, if their blood would be analyzed, they will be found to be contaminated in an irreversible way.
No one could forget the pictures of the carcass of 25 cows, available on all national news channels, poisoned by cyanide along the Mola di Santa Maria feeder river near Anagni. This case focused the public attention on the phenomenon of the waste spilling into the river from Colleferro on, occurring on daily basis, that is performed with a sense of impunity by the local industries and barely monitored by the authorities. These companies, especially in the Anagni area, do not have even purification plants, that are still to be built since years.

It is also impossible forget thousands of heads of cattle burnt because of the milk contamination caused by the B-HCH. This environmental disaster caused a generalized shutdown for many farms between the provinces of Rome and Frosinone, sinking also years of sacrifices. 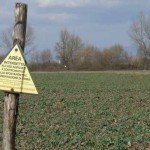 6, Italian government recognized a sort of emergency state for the Valle del Sacco after the analytics results from the samples on the raw milk coming from a farm, showing B-HCH levels many times above the limits set by laws. After a year, the valley has been named as “national strategic site for recovery” in the Italian balance law 2006. Other surveys showed also that the pollution is widely spread in a larger area, due to the use of the river waters, contaminated by toxic wastes, for irrigation. Besides animals, even humans could have been exposed to such pollutant agents and that has been confirmed by epidemiological surveys carried our by Roma E ASL agency.

Frosinone is in the last positions in the ranking compiled by Legambiente, for the quality of the general ecosystem (2009). Its province, according to the Environment Ministry data, is one of the 50 most polluted sites in Italy, just like the more famous cases of Porto Marghera and Casale Monferrato. The level of particulate matter (PM) assessed is clearly over the legal thresholds, showing 117 days in which the threshold have been surmounted in 2009.

The Sacco river is at the same time, a sewer collector and a sort of “chemical lab” because of the swarm of venomous chemical products that hosts. Ground waters, are contaminated by heavy metals. Soil are permeated by pesticides and tumors’ diffusion shows anomalous peaks.

All that was not sufficient to prevent the construction of an airport with 5 million passenger per year estimated.
Why, while the situation, from an environmental and health perspective, is critic an airport would be needed?

Who wants it? How one can combine environmental recovery and conversion of the valley with an airport?
Why the airport project has already absorbed more than 6 million euros from the Lazio region balane whereas there are no such amount of money for ecologic recovery of the Sacco valley and Frosinone province?

In Anagni, few kilometers away from Colleferro, another incineration plant has been built (for discarded tires) active since 2001. In a 500 meters radius from that area (called Quattro Strade), a whole campaign of measuring done in April 2009, has demonstrated the presence of an illegal contamination by dioxine and PCBs with very high values found in animal samples (hen eggs and milk) and vegetables (fodder).

Analysis went on and in the meanwhile the incineration company requested the authorization to burn also the so called “car-fluff” ( that’s basically what remains after the demolition of a car). In case that authorization would be granted, that would be the first and only national plant processing this kind of wastes, for which the dump solution is no longer available. That would be an enormous business with severe consequences on the surrounding territories because the dioxine and PCBs emissions coming from the car fluff will be even worse than those coming from burning tyres.

Another situation present in that area is the Cemamit issue in Ferentino, a 130.000 sqm plant producing, until 1984, asbestos-based reinforced concrete handworks. 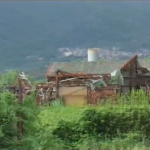 In the area lays the biggest quantity of asbestos ever confiscated in Italy (done in 2001) by the police.
The story starts in the late 60′s following the investment trend lead by the Cassa del Mezzogiorno (a huge Italian public-owned bank). Between 70′s and 80′s in that factory more that 200 workers were employed and hundreds of them were more than 8 hours in these rooms saturated by asbestos particulate with no protection at all.
“Asbestos was taken hay-style, using rakes with no protections at all” says a former worker. In 1964, the first scientific publications showing the harmfulness of asbestos fibers and the deadly risk for human beings were published, but despite that Cemamit continued the production of asbestos-based handworks until 1984, when the closed their activities. Only in 1992 the law 257 has been approved, and the asbestos was banned all over Italy. The environmental recovery of factories and the surrounding soils, was never carried out even if more than 25 years have passed from the shutdown and 10 from the seizure of the area.

Moreover, the asbestos is still present in many civilian houses and rural buildings, representing a further risk for the public health. Despite that massive presence of asbestos, the institutions are still not providing actual solutions to recovery the environment and secure the population.

Considering the enormous quantity of manufactured asbestos products made along the years, probably huge amounts of asbestos have been illegally disposed all over the territories by criminal associations.

(Adapted and translated from an article published on the magazine “Narcomafie” – January 2010 / All pictures are by valledelsacco.eu)